This series spans more than thirty years of activity by Amos Gitai, beginning with Architecture, a short film from 1978. This film, made when the filmmaker still planned to pursue a career in architecture, already contained signs of the critical dimension that would be confirmed in his later documentaries. Gitai became a filmmaker when he made House in 1980. With its return visits and continuations in 1998 (A House in ) and 2005 (News from Home/News from House), this film can be likened to a coming-of-age novel of an architect-filmmaker. It tells the story of a dispossession, from the vantage point of the house’s former owner, a Palestinian forced to leave in 1948. The current circumstances of the Israeli-Palestinian conflict are seen in the builders’ living and working conditions in 1980.

For Gitai, the present is inscribed in a time period and also in a historical stratum. The blending of these two approaches, which constitutes the principal strength of his documentary films, is also seen in his fiction works, such as Esther (1985), Kippur (2000) and (2009). Long sequence shots, which express a kind of continuity, are inserted into a montage of fragmentary and at times dissonant shots. The story, with its biographical or autobiographical content, encompasses and overcomes the documentary/fiction distinction upon which cinematic discourse still rests and which Gitai takes apart.

House illustrates that the dramatic processes of documentary film are analogous to the constructive methods of an architect. The construction of the film responds to the transformation of the house. The quarry from which the Palestinian workers extract the stone is an allegorical place. The power relations characteristic of the world of labour are related to a situation of political domination, based on the appropriation of territory.

Produced in by a television network, the film has never been distributed in that country. But Field Diary, shot in March of 1982, just before the war with Lebanon, did lead to a climate of hate, as Gitai described it, that prompted him to take exile in France. Pineapple and Bangkok-Bahrain were made from this position of distance. The two films use investigative reporting practices and constitute a diptych on the networks of exploitation and servitude at the international level.

The central question explored by Gitai’s work, and found throughout the nine features and the short film that make up this series, is the construction/violence relation, particularly vivid for an architect-filmmaker in a country in which territorial conflicts are always accompanied by acts of construction and destruction. Constructions appear as the response to or the prolongation of violence. Like violence, construction is material, physical yet it also has a symbolic dimension. That is why his films are an ensemble of elements that take on meaning in the course of a story, inside a film or from one film to another. Gitai is an architect-filmmaker, but he is also a biographer-filmmaker. His life is one of the biographies that make up an open-ended opus, an opus under construction. 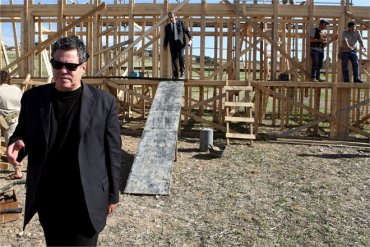 This event serves as an introduction to both the film series and the exhibition dedicated to the filmmaker. With a notion of documentary as a poetic tale of resistance, the work of Amos Gitai has profound

links with the narration of place using life experience, an aspect that lends structure to the exhibitions Biographical Forms and The Biographies of Amos Gitai, both curated by Jean-François Chevrier.
Encounter Seminars and Lectures 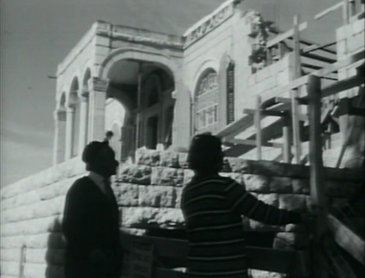 House, or Baït according to the common transcription of the Arabic and Hebrew words, is the story of a house in West Jerusalem. The home belonged to a Palestinian family until the war in 1948 that, with the founding of the state of Israel, forced its owners into exile. At the time of the filming, the house is in the process of being enlarged. The film features the voices of the successive owners and renters (from 1956 onwards) and also that of the previous owner, Mahmud Dajani, a Palestinian doctor who must live with the errors of the radicalism of his defeated compatriots. Some neighbours recount their memories. A Palestinian worker denounces his working conditions and Israeli domination of the occupied territories.

Two years earlier Gitai had directed what he himself called his    last film on architecture, Architecture, which was shot in Haifa. The International Style, which his father the architect Munio Weinraub Gitai (1907-1970) followed, is denounced by means of a comparison with vernacular forms of construction. 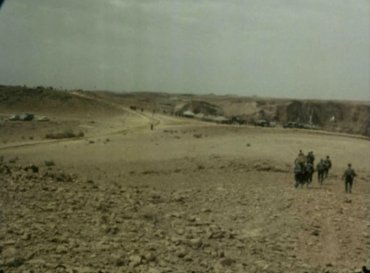 This film examines the legitimisation of the violence used against the Palestinians: It is the story of the occupier’s inability to face up to his own actions, taking refuge in abstractions (God, the Nation, Security) and turning that into a mechanism for legitimising what he does , in the words of Gitai. The filming began three months before the Israeli invasion of Lebanon. The film describes the escalation of violence and how it becomes installed in people’s mentalities. The takes are long and the film is made up of sequences that are dramatic units in themselves. Various sequences are devoted to a visit with the mayor of Nablus, who is under home arrest. The dramatic argument resides in the confrontation between the witness-filmmaker (the small crew behind the camera) and the police forces (the army) and the revelation of the effects that nationalist propaganda has on young Israeli soldiers. 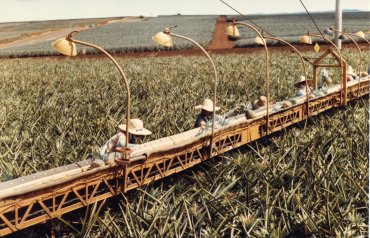 This film is an inquiry into the methods of rationalisation and exploitation used by multinationals in today's global economy. The example studied is a pineapple-producing company with headquarters in , a distribution subsidiary in , and croplands in , although cultivation is in the process of being outsourced to the . The voices are those of the people involved in this system: upper and middle level management, foremen and workers, in the fields and in the packaging facilities. Part of the “packaging” is also the Christian moral propaganda that allows order to be maintained without physical violence. 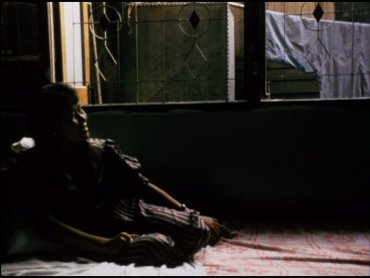 Shot one year after Pineapple, this documentary is an uncomfortable look at the extreme forms of modern slavery existing in : prostitution and the trade in labourers hired for jobs in the . The film gives a voice to the people who benefit from this exploitation. It also attempts to overcome the silence imposed on both prostitutes and emigrant workers. Enslaved bodies are given words under coercion. The film points out the obstacles to these people telling their story, a minimum condition of identity and a means towards emancipation. 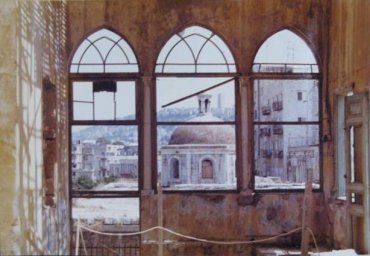 Esther is Gitai’s first fiction film. Conceived as an immense tableau vivant , it tells the Old Testament story of Esther. The film was shot in the ruins of ’s old Arab quarter, Wadi Salib, where Palestinians lived until 1948. The neighbourhood was destroyed in 1959 as a result of a rebellion by the newly-arrived Sephardic population against the power monopoly held by the Ashkenazi community. This historical stratification becomes the setting for the biblical tale, which tells of the struggle by the Hebrew people to survive in the . In the end violence is exercised also by those who have been oppressed.  But the film concludes with a return to the present: each of the main actors tells his or her own story. 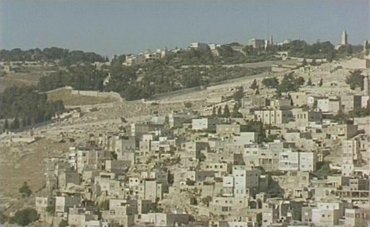 Session 6. A House in Jerusalem

A House in Jerusalem
1998, blu-ray, original version with Spanish subtitles, 85’

Eighteen years after his first feature film, Gitai returned to the locations of House and resumed his investigation: the time of a generation has passed, Mahmud Dajani is now dead, his son has adopted Canadian nationality and his granddaughter says she is moving to Canada. The film’s territory has become larger, it is now about several houses instead of just one. An Englishman and a Swedish woman have moved into the neighbourhood. Palestinian workers , Gitai comments, discover Jewish archaeological sites that will later be used to justify the expulsion of the Palestinians. 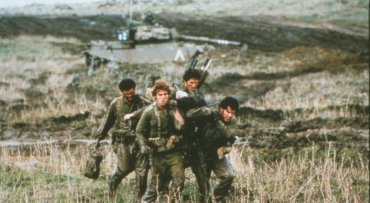 On October 11th, 1973, during the Yom Kippur war, the helicopter Gitai was aboard was shot down by a missile. The film reconstructs the episode and the circumstances surrounding it, beginning with the declaration of war. Kippur is one of the best examples of the war film genre in recent filmmaking. The war is shown to be a present time inscribed in people’s gestures, a present that takes over bodies and impregnates biographies. The images have a great physical presence; the sound is imposing, horrific. I tried to create an ongoing bombardment of sound. I wanted people to feel that the episode is beyond the camera’s control, that it exceeds our field of vision , states Gitai. 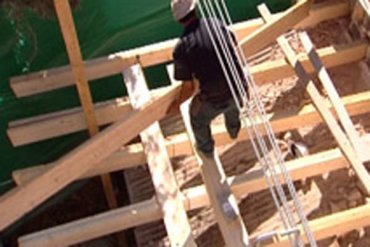 News from Home/News from House
2005. 35mm, original version with Spanish subtitles, 97’ Courtesy of the Institut Français

At the beginning of this film, a sign says: This film, House , has been filmed three times over the past twenty-five years. This tends to make one think that the three films devoted to this house in are but one. Gitai suggests as well that the cinematographic story absorbs the time period. The film is shown to be akin to a construction taking place over time and history. In the words of the filmmaker: In a way, documentaries are something like a human archaeological site, I think this is the function of documentaries in general: to excavate, to make the plan as a whole appear, to reveal the structure masked by the present (…). Layer by layer we see the characters arriving: workers, owners, people bringing little things, fragments of memories, events, photographs. 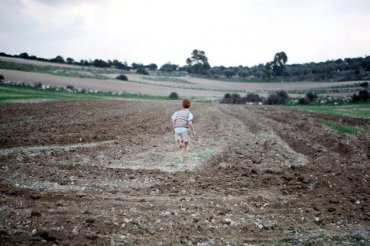 Carmel is one of the two films that Gitai has dedicated recently to his parents. The main character is Efratia Margalit Gitai. She passed away in 2004, having been born in 1909 in Palestine, (Haifa) to parents recently emigrated from central Europe. She married the architect Munio Weinraub Gitai in 1936. The film, conceived as a poetic montage of documents and acted sequences, reconstructs the key moments in Efratia’s life, but also in the life of Amos, as a child and then as an adult, in relation with his own children. The documentary material comprises essentially family photos and letters read by actors, with the addition of a fragment of film-memory shot in super 8. The archaeological form of House is found here as an elegy. Carmel is the name of the mountain looming over Haifa.

Free admission, but space is limited